Mata Amritanandamayi is a highly respected woman saint in Kerala with a huge following, who is popular across the globe for her expression of universal love and her social and philanthropic activities. She has been contributing in many ways, both spiritually and socially, in removing the inequalities that women have been facing.

As a woman saint, her viewpoint on this sensitive subject of allowing women into Sabarimala carries weight and requires a serious study. Below is the English translation of her Malayalam talk on this subject:

“In fact, there is no bar for ladies to visit and worship at Sabarimala temple and many ladies are indeed visiting and having darshan of lord at Sabarimala. The only thing is that as part of the procedures of austerity stipulated for devotees visiting Sabarimala, there is restriction for women of a specific age group to visit the place.

In Amma’s conception, God is beyond the distinctions of man and woman. But when we consider ‘God’ as a principle and God as a formally consecrated ‘deity’ in a temple, there is subtle difference that we must take into account. God is indeed an infinite consciousness. But a deity inside a temple is not exactly same.

There is a difference between the two — like the difference between fish in the seas and the ornamental fish carefully nurtured at homes in the glass tanks. If you don’t feed food at proper intervals for the fish in the tank, they cannot be sustained. But we don’t have to bother about feeding the fish in the seas; In the same way, for formerly consecrated temple deities, we have to conduct daily pujas, offer sanctified food, do special pujas on special occasions as per prescribed norms in the Shastras or else, the divine consciousness existing in the deities would get deteriorated.

On the other hand, God as an omnipresent and omniscient entity will not get affected anyway whether formal worship is done to Him or not.

Just like the different fish types in the glass tank require provision for oxygen and feeding of specifically formulated fish food, different deities in temples require different and specific mantras for worship and procedures for cleanliness and purity to be maintained in the temple. The mantras meant for a smiling deity would be different from the mantras of the same deity conceived in an expression of anger (rowdra bhava). Even though the same divine power permeates everywhere, the specific ways and practices in which the deities in specific temples have been conceived are different.

With regard to Sabarimala, the faith of the devotees of Lord Ayyappa is that the rules and procedures of austerities prescribed for the temple are based on the wish of Lord Ayyappa who undertook penance in the hills as a ‘Nitya Brahmachari’ (ever celibate) and prescribed the regulations before he entered into samadhi. It is based on this belief that ‘Malikappurathamma’ is still waiting outside and those devotees who follow the prescribed austerities and procedures can visit and have a darshan of the lord.

Since devotees follow such a strict regimen (including sense control) , it is not right to demand that young women should be permitted entry in to Sabarimala and olden practices and rules should be changed accordingly.

It is not right to demand that all the temple conventions should be thrown to dust. Such practices and conventions are like pillars holding the dharma.

If at all there is a such a need for change, actually it is the women, who are ardent devotees of Lord Ayyappa, are the ones to state their stand on this matter. After getting such an opinion, let the Government, temple shastra pundits and the priests sit together, discuss it and come to a decision. If there is really a need, then rules may be reviewed and changed; but is should not end up like bathing a child repeatedly for cleanliness with water and then throwing away the remnant water along with the child!” 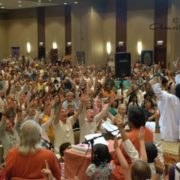 To what extent Hinduism has reached the west? Who are the main saints that contributed in spreading Hinduism’s concepts across the globe?

Why Amma always speaks high of her mother who had given her so much of hardship in her younger days?

If the self is already eternal, deathless, and one with Brahman, why do I have to make any spiritual effort in life?
3 replies

Amma tells a story on Power of Love – Human love evolving into divine...
Scroll to top
About the Author ...