1.  How golden shower tree came in to being

[Amma: “The ‘Vishu’ signifies beginning of a new year when we submit all that we have to God and  pray for his blessings. Surrendering to God brings us all prosperities. The golden-shower flowers (Konnai), cucumber and a pot full of coins represent beauty and prosperity. The blooming of golden shower trees everywhere during this period is such a feast for eyes. When nature is rich, it reflects richness in our lives too. There is a folklore associated with the Golden shower tree and the Vishu festival:”.]

Long ago, there lived a brahmin boy who was deeply devoted to Lord Krishna. He would get up early in the morning and go to a nearby temple daily for worship of his beloved lord. He would do archana with flowers.

The boy’s family lived in utter poverty. His mother was always sick and bedridden. Some times, he would cry his heart out to Lord Krishna about the pitiable state of his family.  One day he returned home after completing his prayers in the temple. He was feeling very hungry and was extremely tired too.  He lied down on a mat for resting and soon went into deep sleep.

He had a dream. Lord Krishna came to him and smiled at him enchantingly. He played the flute to entertain the boy. He stroked the boy’s face and back with his hands to soothe him. Then Krishna took out a little bell from his golden waistband and put it in the boy’s palms. Krishna disappeared immediately.

The boy woke up immediately. He was surprised to see a little golden bell in his palm. He could not believe his eyes. With unabated excitement, he ran to his mother and said. “Ma, Krishna came to me in my dreams and gave me this golden bell!”

His mother did not believe him. She was angry at him thinking that he might have stolen the golden chime from the ornaments of lord Krishna at the temple and chided him for his misdeed.

The boy felt extremely upset and he threw away the bell. It fell under a tree in their courtyard.  What a surprise! The tree immediately blossomed.  It bore bunches of flowers in golden color, each looking exactly like the little golden bell that the boy threw away. It was indeed the ‘Konna’ tree (Sarakkondrai – Golden Shower tree)!

Seeing this, the mother was struck with wonder. Then a divine voice was heard. It said: “From now onward this tree will bear these golden yellow flowers every year on this same day. Those who look at it first in the morning will be bestowed with all prosperity. ”

From that day, the boy’s family started prospering. The mother got cured of her illness.  The day was called ‘Vishu’ and this day signifies the arrival of divine blessings to those who pray with sincere and pure heart.

Once in a village there lived a boy who neither attended school nor learned any skill to earn a livelihood. His aged father, who was a coconut tree climber, took care of his son while he was alive. One day, he passed away and the boy had to suffer in poverty with no one to take care.  Villagers, assuming that the boy too would be skilled in coconut tree climbing, sought his help to pluck coconuts in their gardens. When they came to know the truth, they chided him as useless. 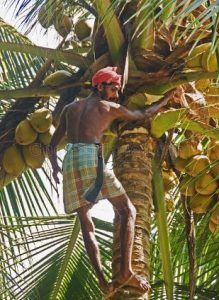 The boy had no other wherewithal to survive as he did not possess any other skill.  So, he took a decision that he would start learning coconut tree climbing on his own effort. He knew that it was a very risky job; if he happened to fall, he would end up with fractures and perhaps even permanently handicapped making any other means of survival too difficult.

Therefore, with lots of of caution he started practicing climbing. He will embrace the coconut tree trunk tightly and climb carefully step by step. After climbing a few feet, he would jump down and climb again. He gradually increased the height of climbing and he practiced whole heartedly again and again. He found his hands and legs strengthening day by day and his self confidence to climb up to larger heights too improved gradually.

This way, by repeated practice and perseverance, he became adept in coconut tree climbing and do it very fast too.  His livelihood thus got ensured.

Once a king, who was a great devotee of Shiva built a magnificent temple for Lord Shiva. He made elaborate arrangements for the ritualistic consecration of the main deity. The date was also set for the ceremony.

Lord Shiva also told the king the name of the devotee (Poosalar Nayanar) and his address in a village where the consecration of the temple built by him was to take place the next day.

The king woke up at that moment. He thought, ‘Is that temple far more grander than what I have built? Then I must have a look at it’.

The next day morning, surrounded by his royal entourage the king went to the village. To his surprise, he did not find any new temple there. He inquired about the person (Poosalar)  that Lord Shiva had mentioned to him in the dream and went in search of his house. Another surprise awaited him there. It was actually a very dilapidated hut.  As the king peeped inside, he saw a poor man in tattered clothes sitting there and immersed in deep meditation.

The king felt amused. “Oh! Is this poor man the great devotee that built a temple?” he thought. He prayed to Lord Shiva to clarify his doubt.

At that time,  Lord Shiva blessed him with a vision by which he could get a projection of what was going in the poor man’s mind in his deep meditation.

What he saw in the vision was a great, grand temple, far more wonderful than the temple built by the king. People holding thousands of pots of Ganga water were performing abhishekam to the deity in the temple. He could here blowing of conches and loud chanting of vedic mantras. Many saints and sages and celestial Gods were present there to watch the holy ceremony. In the Shivalinga being consecrated, Lord Shiva was present and he was blessing all the devotees gathered there.

On seeing it, the king’s pride crumbled.  He understood the intensity of devotion the poor villager had on Lord Shiva. He fell at the feet of Poosalar with reverence and humility.

[Amma: “Children, we must indeed establish and consecrate God in our heart. Not understanding this, most of us give too much importance to external austerities and aggrandisement of worships and rituals. Our heart must be filled with devotion and purity. Mind should become one pointed on God; then God will shine there for ever.”]

Once a man was travelling with his wife in a ship.  Oneday, there was a sudden change in climate. The sky was covered with thick dark clouds. It started raining and soon the wind started blowing very powerfully. The ship started swaying dangerously on account of the storm.

All the travellers in the ship got extremely scared. They started shouting and crying.  While the man’s wife too started weiling out of fear, the man was keeping his cool.  He was trying his best to comfort his wife but he could not succeed. All his efforts to assuage her anxiety and tension did not yield any result. The man lost all his patience.  He opened his baggage, took out a pistol and holding it at her temple he shouted, “I am fed up with your cries. If you don’t stop immediately, I will shoot you”.

The wife was least disturbed by seeing the pistol nor by his threat.  She said, “Do you really think I will get scared by your threat? No way!”

“Are you not afraid seeing this pistol, with my finger ready to press the trigger?” asked the husband.

She said, “I know that with a single shot the pistol can kill me. But as long as it is in the hand of my beloved husband, I have the least fear about it. I know pretty well that you will not think of doing even a minor harm to me!”

The man said, “In the same way, I know pretty well that the control of this storm is in the hands of God whom I always worship.  I have complete faith that God will not do anything harmful to me. That’s why I am least disturbed about this storm; whatever comes I will face it boldly, because I am under His protection always”.

[Amma: “Children, whatever difficult situations we come across life, we must have the firm faith that God’s hands are behind it; if we have that conviction, then we can face the situation without any fear. This does not mean that we don’t have to make any effort on our part. Whatever we could do within our capacity, let us do it; anything beyond it, leave them to God’s will and accept whatever He deems fit. If we develop such an attitude, we can always live with mental peace in our life”.]

Free Will versus Determinism from Hinduism Point of View 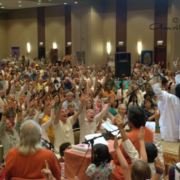