You are here: Home1 / Draft – Hinduism-Home Blog Page2 / Stories with spiritual message3 / Stories told by Amma4 / Amma’s stories on the power of Love 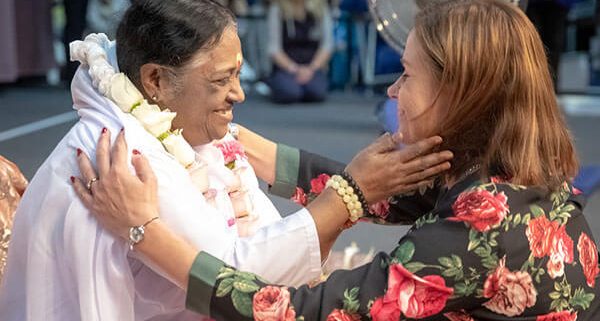 [Amma: If there is some thing that can rid us of fear and give us the power to move forward overcoming all hurdles, it is love.]

Once there lived in a village a widowed milkmaid with her little daughter. She sold milk to the residents of a kingdom who lived inside a well guarded fort. The fort was on top of a small hill and her village was situated outside, at the foothills.

One evening, after she finished selling milk inside the fort, she got delayed. As she returned to the exit gate, she found the gates locked. She appealed to the guards to open the gates for her, saying, “I have left my little child alone in my hut. It is already late in the evening. If I don’t return before dark, my daughter would be gripped in fear and start crying; if something happens to my daughter, there is no point in my living any more; please take pity on me; please allow me to go out!”

But the guards were extremely rigid and they refused to open the gate for security reasons. They told her to stay somewhere inside for the night and leave once the gates open early at sun-rise.

Overwhelmed by disappointment and grief, the woman left the place and started frantically searching for some way or means to escape from the walls of the fort.

In the next day morning, the guards opened the gates. They were surprised to see the milkmaid waiting outside the gate with her milk cans to enter into the fort! They were taken aback. How on earth did she manage to sneak out of the walls of the well protected fort on the previous evening?

The took her to the king.Upon inquiry, the milkmaid explained her predicament and anguish on the previous evening. She told the king that after a thorough search, she found out a small crack on the wall of the fort through which she escaped. The king was curious to know where the weak spot was and he went along with the maid to see the location.

The king was extremely surprised to notice that it was almost impossible to notice the existence of such a small crack in the wall through which a person can escape with difficulty. It was indeed a very dangerous endeavor to climb the wall to that cracked area; further, on the other side, the slope of the hills were really treacherous and it was indeed a very dangerous task to descend the hills that way. It really looked to be a superhuman effort to accomplish it.

The king asked her, “Were you not gripped by fear to escape through this extremely dangerous path in darkness?”

The milkmaid replied, “There was only one thought in my mind last evening. I have got to got out somehow or other from here and reach my little daughter. I know how scared she would be if I were not to reach her before night. I totally forgot about the safety of my own life; there was no place for fear in my heart at that time”.

[Amma: “True love or relationship depends on the depth of inseparable sense of togetherness. Such a deep emotional bond happens in the mind and hence it cannot be measured. In proportion to that feeling of togetherness, it manifests in the outer physical plane too. People having such a deep love on each other will have resonating thoughts too. A husband will understand the wife thoughts even before she expresses them; so does the wife.”]

Once a husband was sitting in his room at his house deeply engrossed in some office work that he had brought home on a holiday. He was feeling tired and wanted to relax for a while. However the work was so urgent that he had to finish it off and hand over it to the office the next day.

He was fighting sleep and trying hard to concentrate. He thought, “If only I get a good cup of coffee”. He knew his wife was busy cooking at the kitchen. It was an odd time when he did not normally drink coffee. He did not want to disturb his wife.

As he resumed work, his wife appeared in his room with a hot cup of coffee in her hand! The husband was surprised! “How come you know that I longed for a cup of coffee?”. The wife said, “I just felt you needed a cup of coffee; that’s all!”

One young man used to go by his motorbike to meet his lover regularly.  Driven by the urge to meet his beloved girl, the young man used to drive rashly, without bothering to obey traffic rules. Even if he sees Red light at traffic signals, he would just ignore it drive ahead without stopping. Many times he met with small accidents on account of his rash driving.  But he never bothered about them.

One day, he was driving his bike with one of his friends sitting at the pillion. His friend knew about the man’s rash driving habits. On that day, the young man stopped his bike at one of the traffic junctions when he noticed red signal. He took out his girl friend’s photo from his pocket and looked at it lovingly while waiting for the signal to turn green.

His friend was really surprised. ! “Hey! What happened to you? I have never seen you stopping your bike at signals?”

The young man replied, “All these days, due to my excitement to meet her, I drove fast, ignoring signals. I never bothered about traffic rules or other vehicles. The only thought that occupied my mind was to meet her as fast as possible. But of late I have started thinking: ‘If, because of my rash driving, I were to meet with an accident, will it not throw her into grief?’. Now, with such a thought arising in me, I have started to drive responsibly, obeying traffic rules!”

[Amma: “Like this, if we are driven only by our selfish likes and dislikes, we feel rules and regulations are unnecessary. But when we take into consideration others’ interests and concerns, we get awareness and patience; then we understand the need to follow rules and regulations.”]

Amma’s stories on managing anger and other emotions – 2
Scroll to top
About the Author ...