You are here: Home1 / Ashram life

There are a couple of thousands of devotees of Amma staying with her in the Ashram. One can find all sorts of people from all walks of life irrespective of caste, color and creed residing as Ashram inmates in Amritapuri. But for the fact that all those who are staying in the Ashram are Amma’s ardent devotees, one can find people with all sorts of personalities and idiosyncrasies living in the Ashram, as though a miniscule representation of the outside world! 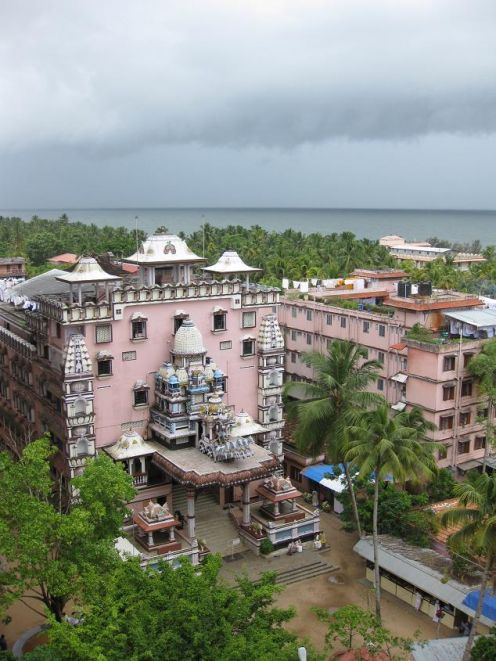 Ashramites can be broadly grouped into two categories — the celibates and the householders.The celibate ashram inmates comprise of  five or six sanyasins clad in reddish saffron (mostly the senior-most and first round of unmarried disciples of Amma), a few tens of procedurally initiated brahmacharis and brahmacharinis wearing yellow robes (who are potential sanyasins of the future) and several hundreds of brahmacharis and brahmacharinis clad in white. These people’s needs are fully taken care of by the Ashram. Currently one  lady Sanyasini (Swamini Krishnaprana) is an Australian. Several western Brahmacharis and Brahmacharinis (of origin USA, Germany, France etc) are also living permanently in the Ashram.

The above category of residents have dedicated their soul and life to Amma. They are all engaged in some form of service or other — either in the Ashram or in the institutions associated with the Ashram. Most of them also engage themselves in spiritual practices.

The next group of Ashram residents are the house-holders. Here you will find a wide hue of people: widows, widowers, destitute individuals, senior-citizen and middle aged couples living as if in ‘vanaprastha ashram’, middle aged couples living with their sons and daughters (who are studying or working in schools/ colleges/ instititutions run by the Ashram), parents of brahmacharis/ brahmacharinis, relatively young couples with their kids and single mothers/ fathers living with their kids (whose husband / wife may be living outside the Ashram).

The house-holder devotees who live in the Ashram too, depending on their physical conditions and qualifications, are engaged in some form of work/ job/ service in the Ashram or in its associated institutions. Some of them, who have the essential need to have a source of income to support their dependents, work for salary; several of the rest, who are financially self-sufficient, do free service. Householder devotees too engage themselves in sadhana (spiritual practices) depending on their tastes, temperaments and leanings.Ashram provides simple living quarters to all the inmates.

Brahmacharis and brahmacharinis have to share their rooms with two or three colleagues. House-holders get a single-room, bath attached flat accommodation. Householders have to pay the flat’s cost and then own it.Simple, staple and basic food is available for all ashramites from the Ashram kitchen.

Householder residents (except in some specific cases based on needs as permitted by Amma) are to pay monthly for taking the Ashram food. Householders, if they so wish, can cook their food in their flats too. Canteens (both Indian and western), vegetable and fruit shops, grocery stores, juice stall etc too function inside the ashram to cater to the needs of the residents. Permission to live in the Ashram purely depends on Amma’s wish. Amma may allow some devotees to buy and own flats in Amritapuri, but she may not give consent for them to come and stay there permanently.  While even long-time devotees may not get Amma’s nod for their earnest request to come and stay in the Ashram, some relatively new bhaktas may get instant nod from Amma for a permanent residence at the Ashram! It would also happen in Amma’s divine lila where, very occasionally, some brahmacharis and residents of the Ashram may leave the Ashram after a few years of stay!

In addition to the above, there is yet another category of residence inside the Ashram. It is the hostels for the boys and girls (mostly for the first-year-students) of the Amrita University, whose campus is on the other side of the back waters adjacent to the ashram. Out of her infinite love for showing grace to the youth, it was Amma’s wish that these youngsters get a chance to live in the Ashram atmosphere, at least for a year. It is a great opportunity for the youngsters (irrespective of whether they grasp it or not) to attend Amma’s bhajans in the evening, partake the food made in the ashram and engage themselves in a little seva once a while whenever occasion comes.

What makes thousands of such people from all walks of life to leave all the attractions of the world and live in an Ashram like this? It Amma’s divine love. Only those who can open their hearts and soul can ever perceive it.