The young boy Venkataraman (Ramana Maharshi), who was living at Madurai with his paternal uncle’s family, was hardly 16 when he first heard of the existence of the place and the hill Arunachala from a distant relative. In fact Ramana was indeed aware of Arunachala deep in his heart that carried a sense as something larger than anything else.

Once Ramana was rekindled of his spiritual association with Arunachala like this,from that very moment the name of the hill whose physical existence was not known to him till then, consumed him like a fire. After a near death experience at the age of 17 in which Ramana attained his enlightenment, he left home for good and reached Arunachala on 1st September 1896.

Ramana’s attraction to the divine hill was instant, permanent and unwavering. This is what he explains about his attraction towards Arunachala, in the (first verse of) Tamil Song Arunachala Ashtakam that he composed in 1916 out of an irresistible inner urge:

In this song Ramana says

“Oh, great! This Arunachala stands like an insentient hill but who can ever know of its wonders! Right from my ignorant childhood days I knew Arunachala means great, but I didn’t know it’s true meaning, though someone told me that it means Thiruvannamalai. But the hill hoodwinked my mind and attracted me close to it; what I saw was this hill, unmoving.”

But was it just a hill made of stone? No. Ramana experienced clearly that Arunachala is nothing but a gross representation of the effulgent Self, the Atman. As long as one is immersed in the delusion of considering oneself as the gross body, Arunachala too appears to be a gross hill. But, once a person turns inwards and searches for his true “I”, he realizes that verily the Arunachala glows inside as the Self (Atman), inexplicable by words.

This personal experience of Ramana, not really explicable by words, has been explained by him in the 2nd song of the Arunachala Ashtakam:

Ramana says “(what I saw was this hill, unmoving). When I searched inside my self to know who is that seer that saw the hill, the seer was lost and I saw what was really standing there; There was no trace of thought to express “I saw”. (When there was no mind to interpret such experiences) who can ever say “I haven’t seen”? Who can ever express and explain this? Even you, (as lord Dakshinamoorthi) could not express this through words (but only through silence) in the past! So, in order to explain your stature without words, you are standing here from sky to earth, unmoving, in this hill form”.

The holy hill held Ramana like a magnet holding a piece of iron. Ramana explains this magnetic attraction and how this attraction annihilated his “life” in this 10thsong of his “Arunachala Pathikam”:

In the above song, Ramana says “Oh people! I saw this magnetic hill that draws life powerfully towards it! The pranks of the soul of one who thinks of Arunachala even once will get subdued; the soul will be drawn inwards and made unmoving, just like the hill. Know that it will simply consume the sweet soul and learn that it’s the way of salvation. This “killer of the soul”, that glows bright in the heart is nothing other than this Arunachala hill”.

Ramana’s attempts to explain the inexplicable may not be comprehensible to us and it is natural. What Ramana tries to convey is that we have to take hold of the “sthoola” (gross) hill in order to attain the “sukshma” (subtle) state and that’s the whole purpose of the hill’s existence there. Undoubtedly, earnest seekers of Truth have always been drawn towards the Arunachala hill from time immemorial. Thiruvannamalai is the place of Gyanis and the place for Gyanis.

Ramana who was always absorbed in the subtle state of the hill, was no doubt hooked to the gross form of the hill too. His fondness for the hill was immeasurable. Ramana never moved out of Thiruvannamalai from the day he set foot on the temple town (1st September 1896) till his passing away (14th April 1950) –for fifty four long years!

Up to his age of 43, he was residing up in the hills. He took permanent residence at the hills at Virupaksha cave (from 1899 to 1915) for 17 years and then at Skandasramam for another 7 years (1915-1922). From 1922 onwards he shifted his residence to the foot hills, to the present Ramanasramam. Every day he used to make a customary walk at least for a short distance at the hills during his Ramanasramam days, till sickness made him immobile in his last years.

At his prime youth, Ramana never felt tired of roaming around the hills always and scaling up to the peak once a while. Ramana was always joyful to narrate stories and anecdotes of his association with the hill. His love for undertaking Girivalam (circumambulation of the hill) was well known.

More of these in the following chapter.

Annamalaiyar Temple and the hill at the back.

Annamalaiyar Temple and the hill at the back. 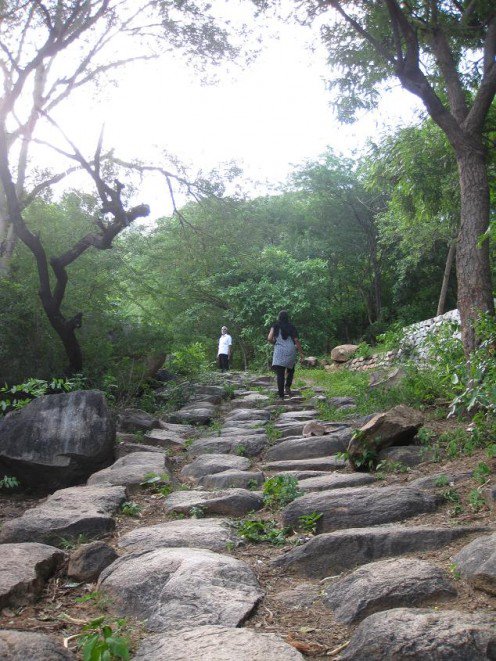 Way up the hills to Virupaksha Cave

View of Annamalayar temple Gopuram from near Virupaksha cave

How does one prepare for Girivalam (Giri Pradakshina) at Thiruvannamalai? Seeking advice on stay, items needed to carry with, making reservations etc.

Understanding relationship between religion and health
Scroll to top
About the Author ...