What are Upanishads? Where are they?

The contents of each Veda are classified into two portions – the Karma Kanda and the Gnyana Kanda. The Karma kandas are the first part of Vedas and they contain  hymns, procedures and instructions regarding rites and ceremonies, rules of conduct and  mantras and verses with intonations etc connected with doing Vedic karmas and fire ceremonies. The second, ending portions called the Gnana Kanda are the Upanishads that contain the quintessence of Vedic spiritual knowledge about God – Jnana.

What does ‘Upanishad’ mean?

Upanishads contain the core spiritual teaching of Vedas and are taught by Rishis to their deserving and spiritually earnest disciples in seclusion.  The word Upanishad in Sanskrit means “sitting down by the side” which actually relates to hearing the teachings of the saint by sitting close to him. Its another meaning is secret doctrine. It also said to mean the knowledge of Self/ Brahman (Atma Vidya/ Brahma Vidya).

Why Jnana Kanda (Upanishads) considered the Ultimate of Vedic knowledge?

The earlier Karma Kanda part of Vedas was essentially to do with hymns, prayers, rituals and rites to please the celestial Gods for getting worldly life with desires and wants fulfilled. But, by doing the rites and fulfilling the worldly desires, several questions also came in the minds of rishis — are they really fulfilling? Are they able to solve all problems? Why wants, suffering, sorrows and pains in life do not seem to get eradicated totally from life simply through the path of conducting vedic rites? Is there some Supreme Truth behind the celestial Gods who are pleased by Vedic ceremonies and other Gods (Eswaras) of creation, sustenance and destruction?

Having  understood the benefits as well as the limitations of totally relying on vedic karmas, there were indeed such doubts and questions in the minds of the rishis. Vedic procedures were too many, disciplines were too demanding, material needs to conduct rites were imposing and there could be so many lapses leading to failure of the intended purposes of conducting yagas. Desires don’t seem to get satiated, expectations are not always met and dissatisfaction still remains in life.

The rishis of yonder started thirsting for better spiritual knowledge; through deep meditation, they  inquired into the cause of birth, death, jiva (soul), God, how God is related to soul, what is the true nature of living and non-living beings, human mind, intellect, ego, the connection between the creation and the creator (God) and so on. Through their tapas, the rishis acquired the supreme knowledge related to all these queries. They experienced that God called by them as Brahman is beyond name and form but inclusive of everything in the creation. It is not just a theory but something experienced and never explicable by words.

What do Upanishads contain?

It is in the Upanishads that the concept of God beyond name and form called Brahman find explanation in so many ways. The advaita concept of Brahman (or parabrahman — universal soul) and atman (Self) being one and the same is explained. Upanishads in fact appear to be a labor of love of the great seers to explain the inexplicable — Brahman who is beyond all names forms, beyond the conception of the mind, omnipresent, omniscient and omnipotent, smaller than the atom but larger than the largest, all inclusive but not not bound by anything, not perceptible to the senses, mind or intellect and yet experienced without doubt by the single minded devotion and meditation of the earnest seeker.

The rishis tried their best to teach this transcendental experience of Brahman in whatever best way they could — by verbose explanations, through poetically expressed hymns, by cryptic but grand statements (maha vakyas), through examples and similes, through stories, prayers,  conversations, arguments, questions and answers and so on.  Such part of the Vedic knowledge, the concluding documents of Vedas is Upanishads or Vedanta.

Upanishads thus form the very core and crux of the highest knowledge of spirituality in Hinduism. They are one of the three authentic philosophical reference scriptures of Hinduism viz Prasthana Triya (Brahma Sutra and Bhagavad Gita are the other two).

Despite the various styles, methods and flows with which the different Upanishads speak, the common thread of knowledge carried by them is the knowledge about Brahman and Atman and the unity between the two.

Thus, Upanishads ascertain monotheism. That One God beyond name and form, being omniscient and omnipotent, can come assuming numerous names and forms to reach His devotees who, based on their tastes, temperaments and conceptions tend to worship him in various names and forms. Whatever different God forms that various Puranas (in Smritis) glorify as the Supreme Gods are none other than Brahman, the Ultimate Truth behind Upanishads.

How many Upanishads are there?

It is said that there are 108 Upanishads. However, the following 10 upanishads are acknowledged to be the most important and comprehensive ones (for study in the order given below), by great Spiritual masters like Sri Shankaracharya: 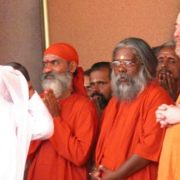 What is the difference between a Guru, Sadguru and Acharya?

Why did Krishna choose Arjuna instead of any other Pandava to teach Bhagavad...
About the Author ...