Krishna was an avatar of God; the whole drama of Kurukshetra war enfolded right under his nose and he was both a witness to is as well as a mastermind behind it to ensure the victory of dharma and also a massive destruction of warriers of kshatriya clan which too was the need of those times.

Karna was just the son of the celestial God Sun. He was not an avatar. He was a very arrogant, boastful, head heavy and a skilled archer. He had a larger-than-life self image about him. He possessed powerful weapons, but on account of his outright arrogance and egotism, he could not substantially reap benefits  through his possessions. But he was indeed a powerful archer and warrior who had the guts to challenge Arjuna.

If at all Karna were to come around to support Pandavas, such a thing could have happened if he got convinced of the diplomatic luring moves made by Krishna prior to war. Kunti had already failed to convince him. Krishna smartly promised to make him the king of Hastinapur (instead of Yudhisthira) after the war, if he switched sides.

Had Karna accepted the offer, he would have got terribly demeaned by the Kauravas and other kings. Perhaps Yudhishtra might have accepted him and would have even agreed to make him the king, but it is unlikely that Arjuna or Bhima would agree to it. Their enmity to Karna was too well deep rooted, considering the insult he had meted out to Panchali. Panchali for sure would oppose any such move to make him a king and the Pandavas would never have the capacity to overrule Panchali!

Thus, perhaps Karna could at best switch sides only with a big scar on his face – as a traitor of Kauravas. Assuming that he switched sides, he could never be equated to Vibhishan of Ramayanam, since Vibhishan’s moral and ethical calibre was of the highest order.

As far Duryodhan, his friendship with Karna was based on a single selfish agenda — Karna as a potential opponent to defeat Arjuna. If Karna switched sides, it will surely whip up lots of emotions in him and he might turn to Bhishma (since Bhishma never ever had any good opinion about Karna and at every opportune moment cut him to size) to cut Karna to size. He might even extract a promise from Bhishma to personally kill the traitor Karna. In all likelihood Bhishma, considering the open dislike he always carried on Karna and his his convictions on kshatriya dharma, he would never accept Karna’s action, despite all his soft corner for Pandavas.

Thus Karna would end up in Pandava’s camp with lots of negativities and drawbacks, considerably affecting his self confidence and pride. His contribution in the war in aiding Pandavas itself would be a big question.

Hence, Krishna’s presence would be still inevitable for Pandavas and definitely Arjuna would ensure that Krishna was with him as per original plans.

Why did Krishna choose Arjuna instead of any other Pandava to teach Bhagavad Gita at the war front? 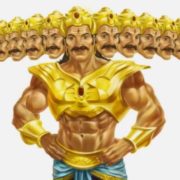 Why do some people do hero-worship of Karna and Ravana? Is it the effect of Kali yuga?

If God has given us the power of choice (free will), why he has not given us...

Why many secularists who are basically Hindus criticise Hindus & Hindu...
Scroll to top
About the Author ...