You are here: Home1 / Tamil God

Murugan is hailed as ‘Thamizh kadavul’ — the Lord of Tamils by poets and Tamil cultural exponents who take pride in the uniqueness of Tamil culture. Murugan is a popular deity widely worshiped in Tamil Nadu and also in Kerala, Karnataka and Srilanka. Worship of Karthigeya or Subramanya (other names of Muruga) is rather sporadic in other parts and linguistic segments of India. 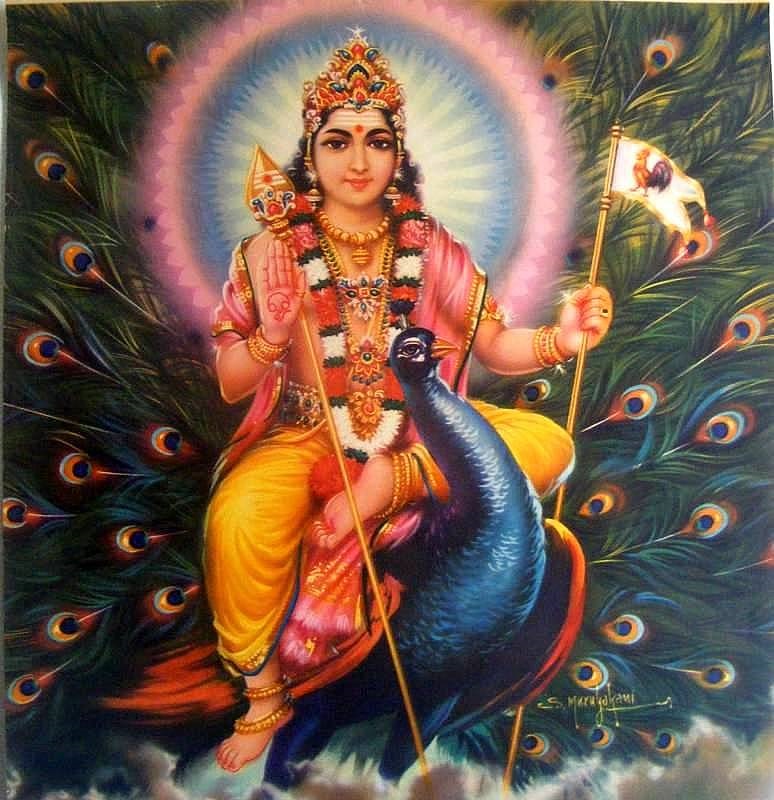 Worship of Subramanya (or Shiva Kumar, the son of Lord Shiva) was in fact one of the formal religious sects recognized and sanctified by Shri Shankaracharya and this sect was known as Koumaram. As Shri Sankaracharya hails from Kerala, it is quite obvious that he was quite familiar with the tradition of worship of Muruga, existing all along in the Hindu culture of the south.

The myriod Tamil names of Murugan

The word Murugan means one who is handsome. In India, naming children with popular names of God is very widely practiced. The name Murugan and his numerous other names like Murugaiyan,  Sivamurugan, Velmurugan, Saravanan, Karthigeyan, Senthil, Arumugam, Subramaniyan, Subbaiah, Subbarayan, Swaminathan, Velan, Kadirvel, Shaktivel, Kandan (Skandan), Kandaswamy, Kadamban, Kumar, Kumaraswamy, Shivakumar, Shanmukham, Palani (it is actually the name of one of his abodes), Palaniswamy, Muthu Kumaran, Sakthi Kumar, Muthukumaraswamy, Dandapani, Dandayutapani etc are widely used in naming children; a vast majority in the above names are quite typical to Tamils.

The birth of Murugan

Murugan is actually Subramanya, the son of lord Shiva. According to mythology, Murugan was born out of the fire that emanated from Lord Shiva’s third eye — his eye at the middle of his forehead, when he opened it to burn Manmata (a lord of love and romance) who tried to disturb Shiva’s meditation and turn his mind towards romance. The very purpose of birth of Muruga was to annihilate the two demons Tarakasura and Surapadma. Elaborate details of this mythology can be obtained from “Skanda Puranam”. The tamil poetic version of this mythology is also available, known as “Kanda Puranam” written by the poet Kacchiappa Sivachariyar (1350-1420).

Murugan with his consorts — Valli at the left and Devayani at the right.

Murugan’s vehicle is peacock and his main weapon to destroy his enemies is “Vel” (lance). His army flag (“kodi“) carries the symbol of rooster (“seval“) and on account of it, he is also known as “Seval Kodiyon“. According to mythology, Lord Murugan is married to two wives,Devayani (daughter of Indra, the king of Devas) and Valli. Valli reportedly belongs to a Tamil tribal community.

Bhagwan Ramana maharshi, of Tiruvannamalai is a Gnyani par excellence. As a gyani, though he does not encourage ideas about avatars, some of his devotees consider him an avatar of Lord Muruga.

Realizing the highest truth of the Atman (and its oneness with the Brahman) is called gnyana (true knowledge) in Hinduism. Attaining this knowledge is also known as the opening of the “third eye” in a person. Lord Murugan, who was born on account of the opening of the third eye of Lord Shiva is a knower of the supreme truth and is therefore referred to as “Gyana Panditan” (An exponent of Supreme knowledge).

Once lord Brahma, the creator of the Universe, out of egotism, failed to show due respect to Lord Murugan, who was then a little boy. Murugan cornered Lord Brahma to expound the meaning of Om

to him and the later could not do it. Murugan imprisoned him citing his incompetence.

Lord Shiva who came to the rescue of Brahma, questioned his little son’s authority to imprison the God of creation; he wondered whether Murugan knew anything about Om. Murugan, the little master was bold enough to tease his father that if Lord Shiva too didn’t know the meaning of Om, he could very well learn from him, provided he came to him very politely, like an earnest disciple who wants to learn from his master.

Lord Shiva agreed at once. Like an obedient student, he sat low in front of his son, with one hand close to his chest and the other hand closing his mouth (this is a traditional way of showing respect to Guru and Saints). Murugan then expounded the secret behind Om secretly in the ears of Lord Shiva.

Since Murugan thus became a saint who taught to the very lord of the universe, he was called Swaminathan. In Tamil, he is hailed as “Thagappan Sami” – one who became a Guru to his own father.

Ramana Maharishi, of Tiruvannamalai, a very famous Gyani par excellence, is considered by his ardent devotees to be an incarnation of Lord Muruga. Though he has not written any hymns about Muruga, his cryptic poems are a source of treasure which contains the essence of his philosophical teachings.

The 6 great abodes of Murugan in Tamil Nadu

A very famous temple of Swaminathan (i.e. Murugan), situated at Swamimalai(near Kumbakonam at Tamil Nadu, India) is associated with the above mythological story. Swamimalai, is incidentally one of the “Arupadai Veedu“s (6 great abodes of Lord Murugan, situated in Tamil nadu).

The other 5 “padai veedu”s are : Thiruttani, Palani, PazhamudirSolai, Thirupparankundram and Thiruchendur. “Thirumurugatruppadai” is a famous and ancient Tamil literature written by poet Nakkirar which contains the stories of the wondrous divine play of Lord Murugan in all these 6 main abodes.

Tamil hymns in praise of Murugan

Several Tamil saints have had the divine vision of Lord Muruga. A couple of them have been initiated to writing poetry by the lord himself. “Thiruppugazh” by the saint Arunagirinathar is a wonderful piece of Tamil poetry containing poems pregnant with devotion on Muruga and they overflow with beauty, rhyme and rhythm. Kumaragurupara Swamigal is another poet, who’s “Kandar Kali Venba” and “Muthukumaraswami Pillai Thamizh” are wonderful pieces of devotion and literary content. “Kanda sashti Kavacham” is another very popular hymn known to most of the devotees of Muruga, written by by Devaraya Swamigal.

Murugan is worshiped by Tamils at many occasions specially considered conducive to his worship right through a year. “Thaipusam” is one important festival, celebrated in the Tamil month “Thai” (January-February). The significance of the day is that it was on this occasion he was given a “Vel” (lance) by his mother Parvati to destroy the demons (Surapadma and Tarakasura).

“Skanda Shashti” is another auspicious period of six days coming in the Tamil Month “Aippasi” (October-November). This period is spent doing fast and prayer on Muruga. “Vaikasi Visakam” or the full moon of the Tamil month of Vaikasi (May-June) is Murugan’s birthday.

Tamils and Murugan – a global phenomenon

Across the globe, wherever Tamil community is settled in large numbers, temples have come up for worship of Lord Muruga. In Srilanka, The Kadirkama Skanda temple in Kadirkamam and the Nallur Kandaswamy temple in Jaffna are very famous. So also are the Murugan Temple at Batu Caves near Kuala Lumpur (Malasia), Sri Thendayuthapani Temple in Tank Road, Singapore, Highgate Hill Murugan temple at United Kingdom and the Sydney Murugan temple in Parramatta (Mays Hill)at Australia.