You are here: Home1 / Yajur

The Vedas (inclusive of Upanishads or Vedanta) are the foremost reference scriptures of Hinduism.

The 4 Vedas (Rig, Yajur, Sama & Atharva vedas) are the original source of all knowledge and they are not attributed to any specific authors or messiahs. They are considered as originating from God, heard and registered by great rishes (seers) of the yore. Hence they are known as Shruti (as heard). Vedas are also known as apaurusheya (not made of man).

Even though certain hymns and mantras are attributed to certain Rishis in the vedic texts, they are recognized as the seers (mantra Drishta) of those texts and not the authors of the texts. According to Kanchi Paramacharya (Sri Chandresekharendra Saraswathi) it is akin to Columbus identifying America — he is not the creator of America.

It is said in Hindu Puranas that Veda was originally one, but in Dwapara Yuga, Veda Vyasa (Krishna Dwaipayana Vyasa), (who is considered an Avatar of Vishnu) split it into four; he did so for the sake of bringing Vedas to logical groups, convenient for transmitting in written form (from the practice of verbal transmission only prevailing in earlier yugas).

Each Veda is broadly said to contain two major parts — the Karma Kandam and the Jnana Kandam. The Karma Kandam deals with mantras and procedural rituals and the Jnana Kandam contains the supreme wisdom — the Upanishads (or Vedanta — The culmination of Veda). While the ritualistic parts got diluted  over the period of time, the Upanishads, the quintessence of Vedic knowledge lives on and they form the basic source of reference for all the supreme philosophies of Hinduism. They serve as guides for earnest seekers and also as reference books for comparing the experiences attained after practice of the spiritual disciplines.

The term ‘shruti’ carries considerable significance because in times of yonder, there was no practice of writing the vedas in scripts, but were only transmitted by chanting and listening from one generation to another. 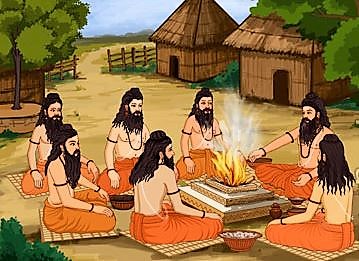 Vedas carry significance not only in their contents, but also in the right pronunciation and  intonations with which the chanting of the mantras are to be carried out. The Vedic mantras carry subtle vibrations and these vibrations were essential to invoke the Gods of nature and get their blessings. The rishis did not want to allow any change in the contents of the Vedas nor in the way they were to be chanted; hence they devised extremely systematic and strict procedures and guidelines for chanting as well as teaching them.

Only Brahmins were allowed to propagate Vedas because extreme austerities involving physical and mental purity, sacrifice, simple living, intellectual capacity, memory capacity,  devotion to God and ability to handle an extremely difficult language of Sanskrit etc were fundamentally essential for the task. Brahmins were nurtured traditionally across generations to possess those qualities.

At the later periods of propagation of Vedas, a properly formulated system of ensuring that Vedas were preserved and passed on generation after generation without errors, 6 Vedangas (Veda Angas, meaning limbs of Veda) were  developed. They deal with outlining and explaining systematically the grammar (Vyakarana), meter (chandas), phonetics (shiksha), etymology (Nirukta), astronomy (Jyotisha) and rituals (kalpa).

NOTE: The Vedangas are NOT part of Shruti, but they are part of Smriti texts.

Parts of Vedas (classification of contents)

Vedas prominently contain mantras, hymns, chants and rites which were/are essential to worship Celestial Gods of nature (Varuna, Vayu, Indra, Rudra etc) in order to satisfy them and get cattle, good harvest, progeny, gold, wealth and possessions for happy living in this world without being troubled by natural calamities. Whatever activities (karmas) and rites vedas ordain for these purposes are classified into Karma Kanda. It must be noted that each of the 4 vedas do contain Karma kandas with Samhita and Brahmana classifications under it.

For convenience sake, the Mantra, hymns and chanting part of Vedas (under Karma Kanda) were grouped in to Samhitas.  The procedural aspects, rites and rituals were explained in prose under Brahmanas.

Samhitas and Brahmanas are primarily concerned with invocation of Gods and conducting fire rituals and sacrifices connected with the 16 samskaras (healthy vedic practices and ordained rituals to be done at various stages in life right from conceiving a child, birth, naming ceremony, beginning of education, marriage, death ceremonies and ending with post-death remembrance ceremonies. At the larger picture, there were elaborate yagnyas (Grand fire sacrifices) conducted by kings like Ashwamedha yaga, Rajasuya Yaga, Vaishnava Yaga etc.

Kings conducted such yagas to establish their supremacy over  other kings, to conquer more  powers through boons to be obtained from celestial Gods, to ensure life in heaven post-death, to bring prosperity to their nations and so on. Such yagas involved lots of materials, elaborate procedures, plenty of gifts to be given to poor people, invited guests (including other kings)  and Brahmins, variety of mantras to be chanted to invoke celestial Gods and so on.  Samhitas and Brahmanas essentially contain all these details.

The Aranyakas contain the Vedic practices, and contemplative analysis and aspects of them related to forest life. In some vedas and in the assessment of some scholars, the Aranyakas appear to be an extension of Brahmanas only and some times they are treated as part of Karma Kanda only.

As per the Ashrama dharmas (Brahmacharya, Grihasta, Vanaprastha and Sanyasa)  prevailing in vedic period, once the duties of family life (grihasta ashrama) are over, middle aged husbands and wives shifted to forest for living a life of austerity and divine contemplation. As per vedic tradition, they get so much used to doing their vedic karmas with necessary fire sacrifice rites, they tend to continue with those practices in the forest too. The Aranyaka portion of the Vedas contained the necessary scriptural guidelines for them. Procedures and materials for such sacrifices have got to be simpler to suit the simpler lifestyles of forest dwellers.

A relaxed life in the forest without worldly desires also means there was scope for review and contemplation of the vedic practices, finding out better interpretations and meanings of them, questioning their significance, need for search of better knowledge about divinity other than seeking sops from Gods for happy living. The Aranyakas contain the contemplative aspects of the Rishi’s thought process in these matters.

Further, as we can learn from Ramayana, great Rishis like Vishwamitra conducted special fire sacrifices with some grander purposes (for the welfare of the world perhaps  to counter the evil forces like asuras and rakshasas) . Some of them could be secretive too. Suspecting this secrecy, Asuras came to destroy those Yagnas  and thats’ how we find Vishwamitra taking the help of Rama and Lakshmana to protect the yaga. Naturally, the secretive part of rituals too are contained in Aranyakas.

Having experienced the worldly life with its joys and sorrows and having understood the benefits as well as the limitations of totally relying on vedic karmas, there were indeed doubts and questions in the minds of the rishis. Procedures were too many, disciplines were too demanding, material needs to conduct rites were imposing and there could be so many lapses leading to failure of the intended purposes of conducting yagas. Desires don’t seem to get satiated, expectations are not always met and dissatisfaction still remains in life.

The rishis of yonder started thirsting for better spiritual knowledge; through deep meditation, they  inquired into the cause of birth, death, jiva (soul), God, how God is related to soul, what is the true nature of God and so on. Through their tapas, the rishis acquired the supreme knowledge related to all these queries. They experienced that God called by them as Brahman is beyond name and form but inclusive of everything in the creation; it is smaller than an atom but as all pervasive as infinity and it is no different from Self. It is not just a theory but something experienced and never explicable by words.

The rishis tried their best to teach this transcendental experience of Brahman in whatever best way they could — by verbose explanations, through poetically expressed hymns, by cryptic but grand statements (‘maha vakyas‘), through examples and similes, by stories and so on. Such part of the documents is Upanishads or Vedanta (the culmination of Veda) and those parts of vedas containing these teachings are called Jnana Kanda. In some vedas and in the assessment of some scholars, the Aranyakas appear to be a prelude to the Upanishads; Upanishads in some vedas seem to naturally culminate as an extension of Aranyakas.  Hence Aranyakas too are considered parts of Jnana Kanda.

Upanishads thus form the very core and crux of the highest knowledge of spirituality in Hinduism. They are one of the three authentic philosophical reference scriptures of Hinduism viz Prasthana Triya (Brahma Sutra and Bhagavad Gita are the other two).  More details on Upanishads are covered in a separate chapter here:  <> UPANISHADS.

Several portions of Vedas have been lost across time

It is only natural that a scriptural tradition existing and propagated across countless generations  only through verbal transmission from time immemorial, several parts and segments of Vedas have been lost. More than hundreds of Upanishads were said to be existing, but primarily about a dozen of them are existing.  Only a very small portion of Sama Veda is reportedly existing alive now.

The significance of Karma Kanda has also been considerably diluted in present times. Yagas like Ashvamedha or Rajasuya have totally lost their significance since several centuries. However, the crux of Upanishad philosophy is still available intact and whatever existing definitely contain the very essence of the ultimate spiritual knowledge.