You are here: Home1 / Draft – Hinduism-Home Blog Page2 / Itihas & Puranas (Mythology)3 / Q&A-Itihas & Puranas4 / With so many Puranas and stories of Ramayana, Mahabharata and so on, is...

When we teach rudiments of Hinduism to kids (like Gods, worship, praying, getting boons, morals, right and wrong, good habits and bad habits etc) we teach them with stories of Gods and demons from puranas, itihasas etc. All the stories may look like fairy tales.

How many of us who have heard Ramayana and Mahabharata stories as kids have bothered to re-read more elaborate versions of these stories after we became adults? If and when we read them, we can grasp so many things related to dharma, adharma (right and wrong conduct) in actual situations in life. Mahabharata will turn out to be a real story for adults and hardly a fairy tale for children! One will be wonderstruck by analyzing the various characters and how we actually see many people similar to those characters in attitude and behavior in our real lives!

We see how dharma can be wrongly interpreted by many people to suit their own whims and fancies; how deep wisdom about life and living is so intrinsically woven with the story and characters.

Then comes the bombshell – The Bhagavad Gita in Mahabharata! Does it not totally shake up our whole perception about God, religion and spirituality? Does it not turn the ‘fairy tales’ to one grand discourse to grasp the intricate and profound spiritual wisdom of Hinduism?

Unfortunately, so many of us are still kids when it comes to sticking to the fairy tales part of Hinduism and refuse to grow up. Like little kids fighting to establish that their favorite cinema Hero is the greatest, we keep still fighting about supremacy of Shiva over Vishnu and so on! 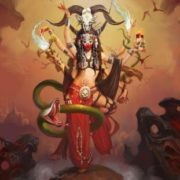 How come there are so many puranas containing same stories in different and distorted versions? Why some Puranas eulogize some Gods while others undermine the same Gods?

விபீஷண சரணாகதி- Surrender of Vibhishana – S...
Scroll to top
About the Author ...