You are here: Home1 / Draft – Hinduism-Home Blog Page2 / Hinduism vs other religions3 / Q&A-Hinduism vs others4 / Why is there no unity among Hindus unlike people of Islam or Christianity?...

“There is no unity among Hindus” is a rather an exaggerated statement, though there is an element of truth in it.

By very design, Hinduism has multiple facets, multiple ways to approach God within its overall scope, offers the freedom of choice, freedom of expression, freedom of dissent and so on. Naturally, it gives religious people freedom to compartmentalize themselves, disagree with other sects, argue with them, demean them etc. Hinduism is so widely encompassing that Sri Ramakrishna Paramahamsa says even atheism is a stepping stone to reach God in Hinduism!

This very fabric of Hinduism also paved the way for Hindus generously accepting other religions to flourish in Indian soil.

It can be safely said that the absence of unity in Hinduism is exactly like feuds within brothers and sisters in a family! They may not see eye to eye with each other, have different tastes and agendas in life, may even split from the family and live alone. But the underlying blood connection never goes. When some calamities strike the family, we can see that all family members bury their difference of opinions and come together! In a similar way, there are indeed occasions when Hindus join together burying their differences of opinions and tastes.

Hindus as a society do face problems and differences on account of caste system; but again, history shows that our religion is not rigid, but flexible enough to acknowledge and take corrective actions in the long haul. Where there is lack of unity, it is mostly fueled and nurtured by petty politicians and social reformers who have no deeper knowledge about Hinduism; they bet on their pseudo-secularism to keep dividing Hindu people for their selfish gains.

However, it is an undeniable fact that caste discrimination and the absence of any single strict authority (like the Pope in Christianity) have paved the way for Hindus getting wooed by other religions by conversion.

On top of it all please consider this:

Historically, how much of bloodshed have you seen amidst Hindus fighting within themselves based on their religious differences? Extremely little.

Compare this with the history of other religions: Shiites versus Sunnis; Protestants versus Catholics.

Then the reality will be far clearer. 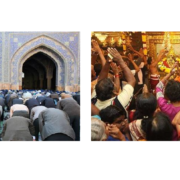 In what way is an average Muslim’s perception of Allah different from an average Hindu’s idea of God?

Why Conversion from Hinduism to Any Other Religion is Highly Discouraged? – Part:3

Why Conversion from Hinduism to any other religion is highly discouraged – Part:2

If a person is compassionate, law abiding, kind, loving, considerate and leads a good personal life, but doesn’t believe in God, would he really go to hell?

With so many sects within Hinduism fighting and contradicting each other, is not Hinduism weakened? Are not other religious people more united?

Why do people convert from Hinduism to Christianity? What benefits do they seem to get in doing so?
0 replies

If a son of a so-called or pure Brahmin deploys himself as a farmer with some...
Scroll to top
About the Author ...