One of the general trends in Hindu culture has been the increased tendency to avoid gurus and saints and concentrate on temple worship.

In fact this is one of the nature of people of Kali yuga.

As people’s wants and greeds increase, as their egoism increase, there is an increased tendency to pray to God in temples directly; their mindset hoodwinks them to believe that gurus are only ‘agents’ and they should approach God directly rather than going through agents.

However, historically, people have also been made aware of the reality that when a Mahatma/ a great saint/ an Avatara Purusha comes, he is able to fulfil the materialistic wishes of the people too, as well as spiritual yearning of ardent seekers. So, those who are not totally bound to ‘temple worship’ but are also keen on ‘quick results in materialistic gains’ tend to rush to Godmen for rapid wish fulfilment.

Frauds and cheaters are part of the world. When a true Mahatma comes and does great things, people throng to him; his institutions grow rapidly in wealth and they get name and fame. Fake Sadhus get attracted by the success of real Mahatmas and tend to imitate them; they cheat gullible people.

There are indeed Gurus of today that the media may project as billionaires rolling in luxury, materialism and worldliness, but they may be totally untouched by any of them even today.

Kali yuga is such that even Ashrams cannot totally escape some pomp, show, commercialization and materialism. Swami Sivananda once said, “If I can serve 100 people unobtrusively or serve thousands of people through advertisement, I would choose the latter”.

If the head of the ashram is a pure realized soul, everything can remain in balance. The institutions may have to be run by ordinary people with ordinary morals (who are yet to be evolved) and some of them may bring bad name to the Mahatma who heads the institutions too! But true Mahatmas accept all sorts of people out of compassion to elevate them spiritually.

It requires divine grace — the grace to know the difference between the right Guru and a fake Guru, to differentiate the wheat from the chaff.

Pseudo-secular Media houses tend to blow up any matter — real or cooked up, against Mutts and Mutt heads. They try to do mudslinging at genuine Mahatmas too and get away with it. Skeptics think that everyone running a Mutt is a fraud and a cheater. 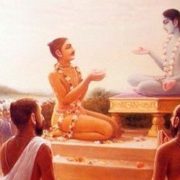 How does a seeker get his right guru? How to seek him? How to approach him? How…

Where can I find a real guru? All popular gurus of today seem to be rolling in…

Why Conversion from Hinduism to any other religion is highly discouraged - Part:2

Why Conversion from Hinduism to any other religion is highly discouraged - Part:1

Are Hindus indifferent to people of other religions? Why is there no practice of converting others to…
0 replies

If a son of a so-called or pure Brahmin deploys himself as a farmer with some...